For all his snark and (as far as I'm concerned, unjustified) judgmental attitude, I still like and watch Anthony Bourdain. He tries to bring travel destinations to you from angles that your typical travel show doesn't bother with. A floating hot dog stand in the Hudson River?! Who knew?  Well, now I do, thanks to his "Hudson Valley" episode.  It aired in February, and the sight of home-cured and smoked sausages at Quaker Creek Store in Goshen, NY inspired a trip north. While up there, I thought I'd also stop at nearby Bobolink Dairy, an artisinal cheese producer featured in his third-ever No Reservations episode, "New Jersey."
Bobolink Dairy

My first stop was at Bobolink Dairy in Vernon, NJ [Teditor's Note: the dairy is moving to Milford, NJ in June 2010].  This place interested me not just because 1) it produced artisinal cheeses that, according to Bourdain, were good enough to be the first US cheeses to be exported back to Europe, and 2) it's located in my perpetually underrated state, but also because 3) the dairy lets their cows roam free and eat grass.  In America, a combination of consumer demand and government corn and soybean subsidies have led farmers to feed dairy and beef cows, chickens, turkeys, and other farm animals (even increasingly, farm-raised fish!) ground-up corn and soybeans.   The animals, who in the wild would never touch corn and soybean, get sick off of it because their bodies lack the proper mechanisms for digestion of said grains.  (Close confinement indoors doesn't help, either.)  The conventional farm solution is to put antibiotics in their feed, which leads to antibiotic-resistant microorganisms that can infect both cattle and humans, among other problems.

The practice of feeding grain to animals is not limited to conventional farmers.  Many certified-organic farmers do it, too; they just do it with organically-grown grain.  So when the rare farmer comes along who believes in feeding animals grass, I feel the obligation to support and write about them.

I stopped in for a sampling of their cheeses, including their cave-ripened cheddar, drumm, Frolic, and Jean-Louis, plus a bleu cheese whose name escapes me.  I did not take notes, and even if I did, I am an inexperienced cheese taster whose opinion basically doesn't count.  But I can say that the cheddar bore little resemblance to its mass-produced supermarket counterparts, exhibiting slight bitter notes and a fuller, more complex taste than anything you'd find at the local mega mart.  I loved the Frolic, which my inexperienced cheese-tasting palate would describe as medium-bodied and comparable in flavor to...I dunno, manchego?  (Don't take my word for it. Seriously, I don't know what I'm talking about.)  I left carrying small orders of Frolic and the earthy Jean-Louis, the latter of which was named after the famed French-American chef who inspired others to strive for better ingredients.  When I arrived home later that day, I discovered the Jean-Louis to be much more bitter than I had remembered it at the farm.  Had I tasted at the farm what I tasted at home, it would have remained in the store.  However, on a whim, I paired it with an inexpensive, medium-bodied Alfio Moriconi pinot noir (pictured above, with two pieces of Jean-Louis in the background and a single piece of Frolic in the foreground) and discovered that I had accidentally made magic.  What a pairing!  A cheese that I dreaded finishing a minute before suddenly became a decadence I had to hold back from finishing too quickly!

I left the farm and headed to the nearby Black Dirt region of Hudson Valley, Pine Island.  At one time really a swamp-surrounded island, settlers in the early 1800s drained the swamp, uncovering the second-largest deposit of impossibly dark, rich muck soil in the United States, remnants of a glacier from the last ice age some 10,000 years ago.  (The largest deposit in the United States is in the Florida Everglades.)  The soil is not to be believed; I could not imagine it even as I gazed upon it with my own eyes. 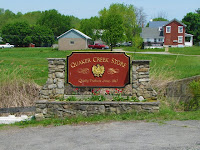 The region's original settlers included Germans and Poles who formerly farmed soil similar to the muck soil found here.  Quaker Creek Store, formerly a general store but now a general store with a small eating area, lives alongside these fertile grounds on a road curiously-named Pulaski Highway (presumably connected to Casimir, but I do not know why).  Appropriate to the area, owner and CIA (Culinary Institute of America) grad Bobby Mateszewski (guess his ethnicity) serves pierogis, kielbasa, bratwurst, and various other sausages appropriate to the season.  Which is what attracted me to this place.  Seeing all of that meat, all cured and smoked in house, on the No Reservations episode was too much to bear.  I had to have some.


You may have noticed that the title of this blog entry does not include "Quaker Creek Store."  That's because the food I had was a letdown.  Not really knowing what to order, I got the Polish platter:  pierogies with sauerkraut, kielbasa, and stuffed cabbage.  (Looking back on the episode, I realize now that Tony Bourdain ate the same thing.)  I'll be the first to admit that I do not know...um, anything about Polish food.  It was good, and I'm sure it was true to its roots:  hearty, warming, filling...but it lacked a certain je ne sais quoi to bring it to the next level.  I think that if I had stopped by this unassuming roadside shop (that's it on the right, below) on a whim without any prior knowledge, I would've thought I'd struck gold.  But driving an hour for this place wasn't worth it. 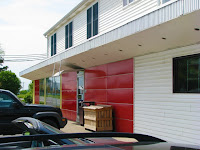 In other news, I met Bobby and his mother, both of whom were very nice.  Behind the register, his mom greeted regulars in the store by name and chatted up a customer about her husband's recent trip, oblivious to the guy waiting in line behind her to pay (me).  I wasn't upset, though; I was too busy fighting small town jealousy pangs.  I love it when people connect that way.  When it was my turn to pay I talked to her about Tony's trip up here.  She said that the producers came in on a Wednesday to eat, asked her if they could film, and then returned on Saturday to shoot everything in a day.  Pretty amazing how quickly stuff like that happens.

Despite the food letdown, I was still glad to make the trip.  I satisfied my curiosity, I found the richest black soil I'd ever seen, and when I made it home I still had yet to discover how amazing the Jean-Louis cheese was with my pinot noir. All in all, not a bad day.