A Toute Heure is my favorite restaurant in New Jersey. Believe it or not, though, I've only been there twice.

A mom-and-pop operation (literally: the wife cooks and the husband runs the front of the house) with about a dozen tables, the restaurant is only two years old, yet it can be difficult to get a reservation on a weekend. The secret to their success is not much of a secret at all: the ingredients are fresh. Nearly everything is sourced local, from the greens, meats, and dairy products, to the Boylan's (high fructose corn syrup-free) soda from 42 km away and the Smarties candy gift from 10 km away. (One notable exception: if you want bottled water, it's Panna from Italy, which is pretty absurd in this blogger's opinion.)

The menu changes nearly daily, which means if you love their ______ and miss it, you may have to sit shiva for 300-something days until the next go-around. Last night, the menu featured a puffer fish with a house-made remoulade; it's available only for about 10 days out of the year. "Missing it" may be more than just a seasonal problem, too: sometimes, they run out of certain foods as the night progresses. Waste not, want not, my friends...tough for an American society that needs everything yesterday. The upside is that I believe it's impossible to get bad food at this restaurant (and I hope never to be proven wrong).

I went a little too crazy on the ordering last night; I find myself writing this at 4:00 am because I don't want to go to sleep on a full stomach (we finished eating seven hours ago). But it was hard to resist because to date I've only been here twice in as many years. Appetizers for me included crispy fried polenta with parmesan and bread crumbs and a roast chili tomato sauce; and a pan-sauteed sweet potato gnocchi tossed with brown butter over a bed of cavolo nero (black cabbage), garnished with a micro sage salad. I'm sure you know how the story goes: they were delicious. The polenta and roast chili tomato sauce went together like an old married couple; the gnocchi was a wonderful play on sweet and savory. I could've done without the cavolo nero, though: no seaweed (texture) on my gnocchi, thank you. Silly of me to order two similar plates of carbohydrates, but darned if I wasn't in the mood for both.

I also got a three-cheese sampler plate (hey, why not?):
No comments:

One of the things I love about being a consultant is traveling.  For a lot of people, it gets old quickly.  Plenty of people get sick of it within a year.  For me, having done this now for four years, I'm still in love with living out of a suitcase.

I should add, by the way, that when it comes to airlines, American's elite privileges pale in comparison to other airlines'.  And if you compare American to other airlines, both domestically and internationally, American falls closer to the utilitarian end of the scale than the luxury end of the scale.  (You want luxury?  Fly Singapore or Emirates Airways.)  But in the United States, of all the airlines that offer lifetime status (not all of them do), American's is the easiest airline on which to attain lifetime status.  I'm not sure if I could ever attain lifetime status on those other airlines, so I chose the safe bet rather than shooting the moon. 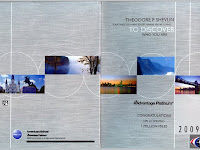 If you're an elite flyer and you don't reach the mileage threshold you attained last year, you lose your privileges the following year.  As a consultant, I've managed to keep Platinum status for the last four years.  However, as a result of crossing the million mile threshold a few weeks ago, I will now never be anything less than a Gold elite.  I can still be a Platinum or Executive Platinum if I fly 50,000 or 100,000 miles in a year.

Believe me, this did not come easily for me:  A million miles is nothing to sneeze at.  Before I started as a consultant, I might've had, oh, let's say 25,000 lifetime miles in my account, if that.  After four years of flying 50,000 miles a year (and the 50,000 bonus miles I've gotten from doing that), that's 400,000 miles.  So in addition to those miles, I had to do make an additional 575,000 miles.  I did that through cashing in hotel points, eating in restaurants where I get miles, buying stuff online and getting miles for them, and chasing after bonus mile opportunities.  Let's also not forget that those 50,000 miles of flying per year weren't all job related.  Working traveling for business, you can't always fly the airline of your choice.  So in some years when I failed to reach my 50,000 mile goal, I had to do some extra travel on my own dime to "top off" my account, an activity that is not only costly both in terms of time and money, but also harmful to the environment.  (Yes, flying for business is also harmful to the environment, but the way I justify it is that if it's not me on that plane, my company would have hired someone else to do my job.  So it might as well be me.)

In addition to all that, there was a constant cloud of doubt hanging over me.  See, lifetime status on American Airlines is an undocumented benefit, subject to change at any time without notice.  What if I reached 999,999 lifetime miles and they shut down the program? 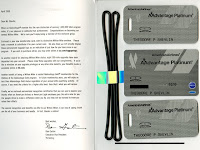 With the weight of all this stuff hanging over my head, needless to say, when I received that e-mail from American congratulating me on my achievement, I was ecstatic.  ("Whether you eagerly awaited this achievement or didn't realize it occurred, I want you to know that we think it's an accomplishment to celebrate."  Yeah, I realized it occurred, alright.)  Yesterday in the mail, I got the brochure you see here in the pictures, complete with a new frequent flier card and two complimentary luggage tags, all bearing a "1 MILLION" inscription.  They were also kind enough to deposit eight 500-mile upgrades to my account.  That means that if I fly from New York to Los Angeles (2,475 miles) I could fly in the next class of service for five of my eight upgrades.

In the old days, they used to give you a better gift:  four systemwide upgrades (SWUs) that you could use to upgrade yourself from New York all the way to Asia.  But unfortunately, in this age of relatively high affluence and affordable travel, so many people have crossed the million-mile threshold that American diluted the benefit.

Concerns and the future

While I certainly would've appreciated a better gift, I also knew that those tokens are temporary; the real gift is knowing for the rest of my life, American Airlines would suck up to me slightly more.  Even though I am now a lifetime Gold member, there are still things to worry about.  First and foremost, "lifetime" refers to the life of the AAdvantage frequent flier program, not my lifetime.  Meaning that if another airline were to swallow up American and push their own frequent flier program upon me, I would immediately lose that benefit.  Currently, American Airlines is the biggest airline in the world, so that's unlikely.  But the industry is volatile, and times can change.  ...which brings me to another concern:  should American go bankrupt, clearly I would lose out, there, too.

There's also the concern that so many people cross the Gold threshold that the airline decides to dilute Gold elite benefits.  Perhaps in the future, traveling 25,000 miles in a year is no longer a big deal.  So American yanks away upgrade privileges from the Gold elite level.  I'm counting on too many people being angry for them to do something drastic like that, though the airline has been chipping away at benefits for years.

In the meantime, though, I am headed for two million.  Over that hill lies lifetime Platinum status, and the furthest lifetime distance you can go.  (After that, they send you four SWUs every million miles, but you never hit Executive Platinum.)  Will I make it?  I think it will.  But the program had better still be around when I get there!
No comments: