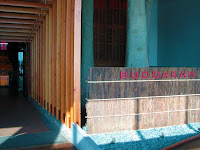 Beaches, casinos, the boardwalk, restaurants, Monopoly streets and railroads.  How is it I'd spent most of my life in New Jersey and never been to Atlantic City?  I'd never really had cause to go there, but I'd always been curious.  So when the chance arrived to meet someone for dinner there, I made the 2.5-hour trek down to America's Favorite Playground.  (Yes, you can drive that long in New Jersey.  If you lived in the northern tip and drove to the southern tip, Cape May, it would take you four hours without traffic.) 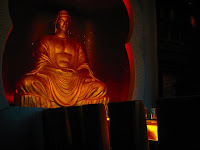 We agreed on Buddakan, a well-known modern Asian establishment in Caesars Atlantic City known as much for its food as the giant Buddha seated at the head of a large, flashy communal table.  I'm a decidedly un-flashy kind of guy.  At the risk of being too crude (or exaggerated), I don't know hip from my own ass.  And it doesn't impress me -- no, it worsens the experience for me -- if a flashy restaurant's food doesn't measure up to its décor.  For instance, Asia de Cuba in New York City:  Flash?  Yes.  (They even have a communal table, too, but it terminates in a two-story holographic waterfall rather than a Buddha.)  Good food?  Good, but not amazing.  Every bite told me, "You're paying for that waterfall."

In a way, because of its flash, Buddakan had an extra hurdle to climb for me.

My waitress clearly knew what she was talking about, so I had no problem asking her for her recommendations.  At her insistence, I ordered the edamame ravioli in a sauternes-shallot broth, garnished with baby onion sprouts.  My dining partner got the Alaskan king crab leg, served with a Japanese arugula salad with fried green tomatoes, chèvre, and a balsamic reduction. 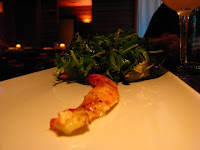 If you know me, you know that I'm not a fan of lobsters or crab.  (Gasp!  The horror!)  Yes, I don't care for the taste, for boiling organisms alive, and spending large sums of money for the cruelty and the flavor I don't particularly care for.  But, I once had an unforgettable Alaskan king crab at another Stephen Starr restaurant, Morimoto in New York City (my previous blog post on Morimoto did not include it; that was another dinner), so I was always happy for a taste.  I have to say, that salad was pretty good, but it really didn't reach its full potential without the king crab leg.  And that was a helluva small piece of crab for $14.  And it was not as good as the one I'd had at Morimoto. 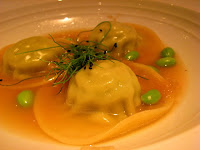 As for my ravioli, I was skeptical.  I thought that the edamame (baby soybeans) filling would be rough in texture as they are when you pop them in your mouth by the podful.  Fortunately, I was wrong; the puréed edamame filling was fluffy as a pillow and strangely familiar, though I'd never had it as a filling before.  The sauternes (French dessert wine)-shallot broth was an excellent, buttery complement to the ravioli. 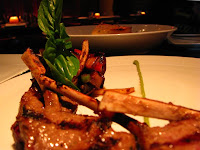 How is Japanese eggplant different from the Italian and American eggplants most Americans (myself, included) are familiar with?  Beats me.  I even did a small amount of Internet research to find out and came up short.  However, the Cook's Thesaurus labels them as substitutes of one another, so there can't be too much difference in the flavor department.  I can also say that they made a ridiculously good salad.  I'm no vegetarian, but I could have eaten that bold, meaty, saucy salad alone.  The lamb, milder in flavor and slightly less gamey than I would have preferred (perhaps I'm weird, but if lamb isn't slightly gamey -- not too gamey -- it isn't lamb), was cake icing. 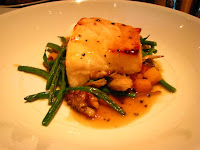 The sea bass with haricots verts (French string beans), mirin (sweet rice wine), wine (don't know what kind...just rattling off what my waitress told me), dashi (Japanese fish stock), shittake mushrooms, and butternut squash sounded like quite an elaborate dish.  But did it work?  Yes, it did.  The haricots verts and sweet squash were excellent companions.  The rich, slightly garlicky (that's a good thing) sauce paired well with the perfectly-cooked fish without overpowering its delicate flavor.  But there was one notable asterisk I have to put forth on an otherwise scrumptious sauce:  white truffle oil.  I don't know what people's obsession with truffle oil is, but quite frankly, I think truffle oil is disgusting and can overpower a dish very easily.  (I felt justified in my repulsion of this stuff when I read an article quoting Anthony Bourdain as saying, "What is vile and disgusting and the single most overused ingredient in the repertoire of chefs is truffle oil. It must be stopped.")  Honestly, there was too much of it in the sauce.  When it comes to truffle oil, I think one part per million should be sufficient.  (My waitress disagreed:  "Don't you just love that truffle oil?"  "Mmm-hmm," I muttered, eye contact avoided.)  Other than that, Mrs. Lincoln, the sea bass was great.  ...no seriously, it was. 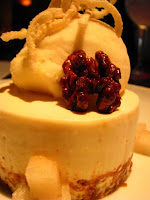 I wasn't planning on having dessert, but I'd read that Buddakan has notably good desserts, and my trustworthy waitress told me that her favorite Buddakan dessert was not even on the menu:  white Godiva chocolate cheesecake with a candied walnut crust, Asian pear sorbet, pomegranate sauce, plus a secret ingredient.  How could I say no to a secret dessert with a secret ingredient??  Actually, it wasn't a secret dessert:  it was simply no longer offered.  But the kitchen had the ingredients on hand, and I knew that if I wanted a taste of this fleeting treat, I should do it now.  The thought that it might have been discontinued because of a lack of popular approval did cross my mind, but I trusted my waitress...in spite of our difference of opinion on truffle oil.

Buddakan is more than just a pretty face; it's a serious culinary heavy hitter.  And it's not surprising that its New York location produced a Top Chef contestant, Dale Talde, of Season 4.  Yes, I didn't like the truffle oil, and I had nitpicky comments here and there.  But few are the perfect meals in this world, and this was a solid one that I wouldn't mind repeating in the future.  Hope to see you again soon, Atlantic City.  And Buddakan, situated right near Boardwalk, and Park Place, I'll be visiting you if I don't land on Luxury Tax the next time around the board.