Even though I write a blog that talks about food, I don't really read other food blogs.  So I was surprised to learn that a much-hyped taco stand stood but minutes from my cousin's place in the Rockaways.  Fortunately, my cousin's on top of the blogs, or I never would have discovered this place.

The Rockaways of Queens, New York are a strange mix:  part beach-side bedroom community, part dense urban jungle slowly undergoing a for-better-or-for worse gentrification.  Rockaway Taco shares a street with a condemned, boarded-up tenement.  Take a guess at their side of the tracks.

But there is nothing too worrisome about the neighborhood or the people, particularly those in line in front of you who, as my cousin pointed out, are most definitely not locals.  Should you find yourself here on a warm, sunny summer day, you will undoubtedly rub elbows with Brooklyn hipsters, Manhattan surfers (the water is not even a five minute walk down the street), and simple, plain curious foodies such as myself.

The wait will be surprisingly long, though.  Not Shake Shack or Grimaldi's long, but even after you surmount the perhaps 8-10-deep line out front, you will find yourself in an adjacent, almost makeshift, outdoor waiting/dining room shoulder-to-shoulder with another 18-20 noshing and waiting patrons.  Use some of this time to grab one of the house-made salsas .

But do not lament the hold-up, for the food here is surprisingly good.

When in the every part of the USA except Southern California, the thought of Mexican food conjures up notions of pools of refried beans, kilos of shredded cheddar, and cinder blocks in the intestinal tracts of all who dare partake of its goodness.  Now, I use "goodness" with purpose, for I enjoy Tex-Mex food as much as any red-blooded American.  But it is important to realize that Tex-Mex is not the same as Mexican.

What are the differences?  There are probably two, maybe three main differences between Tex-Mex and Mexican food:
What does this have to do with Rockaway Tacos?  The stand's chef spent four years in Mexico.

Visible from the street, chef Andrew Field's rooftop garden tomatoes and peppers are emblematic of the approach he takes to food.  Fresh and local ingredients fill many of the plates expedited from the kitchen...plantains may be an exception to the rule.  Of course, a rooftop garden's tomato and pepper yield cannot nearly fulfill the needs of a taquería, particularly one as popular as this.  The Atlantic tells us that he sources additional tomato and peppers from Red Hook, Brooklyn's Added Value, and organic cabbage from Blooming Grove, NY's Blooming Hill Farm, and eggs from urban locavore Manny Howard and Knoll Crest Farms in Clinton Corners, NY.

This short radius mirrors what Mexico, and quite frankly, most of the world, practices out of necessity.  The result?  Peak freshness in every bite.

Though Andrew Field may have spent years in Mexico perfecting the optional Puerto Vallarta recipe for salsa negra (says Cool Hunting), to me the real star of his famous fish tacos is not in the spicy mayonnaise, the optional guacamole, or hand-pressed tortilla -- all good things.  Rather, the crispness of the red cabbage and the snap of the red radish steal the show.  Gone is the Tex-Mex I-swallowed-a-boat-anchor feeling; roughly-chopped fresh cilantro and a squeeze of lime add a brightness to the delicately-battered and fried tilapia.  Afterward, one feels that they have eaten an entrée salad; not surprising considering the amount of green and red drapery over the fish.

Some people complain about the price.  $3 for a taco?  $1 extra for guacamole?  Some may find it to be nothing more than pretense.  They are entitled to their opinions, but the fact is that organic food simply costs more to the consumer.  Current laws on the books favor big agribusiness, leading to a seemingly paradoxical condition:  produce picked underripe on a large pesticide-spraying farm, pumped with ripening ethylene gas, and trucked across the US can often cost less than one grown organically next door.  Labor accounts for some of this difference.  Another factor is that consumers do not pay for the externalities associated with conventional farming, for example, groundwater pesticide runoff and truck pollution.  Eating locally and organically means shouldering more responsibility for one's actions; in many cases, it also means a superior product.

Rockaway Taco may be one of the few New York joints to momentarily convince homesick Southern Californians that Rockaway Beach sits to their west. The most negative thing I could say about their food is that I want more of that mayonnaise on my taco.  Perhaps if it were offered as an extra in the salsa bar.

There is little profound in what they do; I believe that the secret to their success lies in their ingredients.  Ironic that a breakthrough concept in the United States can be so banal elsewhere.  I'm glad that Americans are waking up to it. 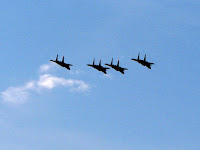 I spent my July 4, 2010 in New York City.  Despite of having lived near or in the Big Apple almost all my life, I'd never been to a fireworks display on July 4.

Unfortunately, doing anything like this involves a lot of waiting in uncomfortable temperatures.  You can't just show up an hour beforehand and expect a good view.  At New Year's Eve in Times Square, I waited for six hours in below-freezing conditions.  The second time I did Rockefeller Center's Christmas tree lighting, I faced freezing rain. The second time at the Esplanade in Boston for July 4, the measured temperature on stage was 49° C / 120° F.  (That day turned my perfectly good white t-shirt yellow.) 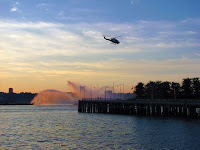 Fortunately, this time wasn't so bad.  It was about 40° C / 105° F, which sounds terrible, but there was a pleasant sea breeze that made it not unbearable.  And there were things to entertain me, like helicopters flying low overhead, jet fighers flying in formation, and fire boats spraying red, white, and blue water into the Hudson River.

The fireworks display was slated to be 30 minutes long.  My camera's 4 GB memory card had space for about 30 minutes, 25 seconds' worth of video.  To be safe, I started recording about a minute into the display because the last thing I wanted to do was miss the ending.  Ultimately, it ended up being a few minutes shy of the half-hour mark, so I could have captured the entire show. 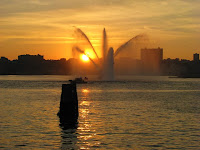 One other problem I faced was not knowing how long my battery was going to last.  To save energy (and thus battery life), I watched most of the fireworks display through my camera's viewfinder.  Afterward, when asked how it was, I said, "Eh."  But on the train ride home, one of the people next to me said to his buddies, "That was the best fireworks display I've ever seen!"  Looking back on the video I took, I have to say it's a lot more impressive than I thought it was.  I'm sure that if I'd seen it with my own eyes, it would have been nothing short of amazing.

Here's my video of the fireworks display, as seen from the grass north of Chelsea Piers at 24th Street.