How to make candy corn

I've heard those words before.  Never understood them, because I'm a fan.  But I'll bet those who have uttered such hostilities toward this Halloween tread have never enjoyed it homemade, before.  I first thought about making candy corn when I wondered how they actually make a candy with three colors in it.  Turns out, the way they do it professionally is not the way you make it at home.  On the assembly line, they make three colors of marshmallow fondant and pour them into a mold.

The way I see it, there are two basic recipes for making homemade candy corn:  One involves melting a marshmallow and combining it with confectioner's sugar (similar to the way they're made commercially).  The other involves combining corn syrup with powdered milk and confectioner's sugar (similar to the way they were first made). I discovered the latter first and have been using it for three years, so that's what I used, here.  I've never done the marshmallow method, but some day I will. I can't do it this year because a single recipe yields more than I can eat in a year.  (In fact, before I made my candies this year, I threw out last year's stale ones.)

Almost every corn syrup candy corn recipe is just like every other.  So, the first hit on Google works fine.  Let's go to the pictures: 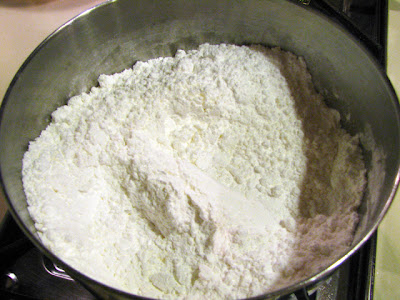 The dry team.  It may look like flour, but it's not:  confectioner's sugar, powdered milk, and salt. 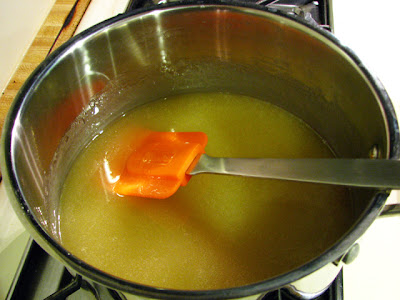 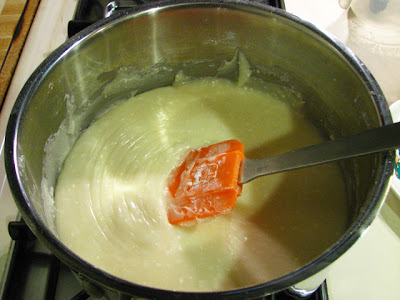 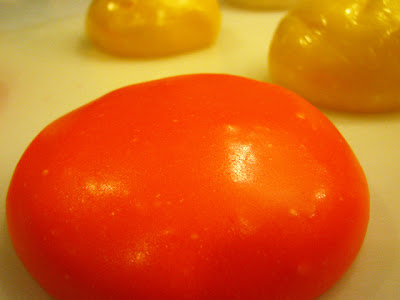 Divide the candy corn into thirds.  (I divided mine into sixths because my workspace was small.)  Dye a third yellow, a third orange, and leave the other third white.  You may notice little white specks in my balls.  Those are undissolved clumps of confectioner's sugar.  Sifting the sugar before mixing might have helped that, but the next step of this process takes so long that I don't want to spend any more time on the other steps than necessary.  Kneading gets out the big ones, but really, nobody sees them in the final product. 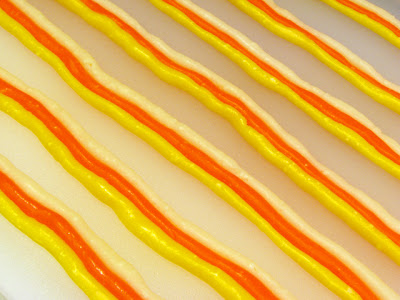 If you decide to skip this last step, you could have candy corn in 30 minutes.  But rolling the balls into snakes, pressing them together, cutting out candy corns, and rounding out the edges by hand takes a long time.  You will spend hours doing this if making them the same size as their commercial counterparts.  Though this batch was made to commercial size, I recommend bigger ones.  After all, who eats just one candy corn piece, anyway? 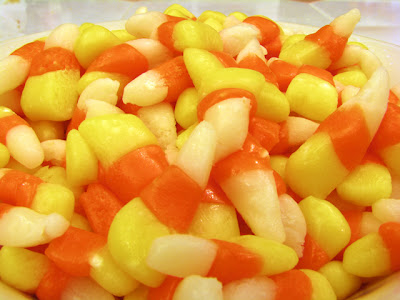 I think we all know what the commercial stuff tastes like.  This has a much more natural feel; the butter, powdered milk, and lack of carnauba wax bring it a little closer to other candies we regularly enjoy, like butterscotches and caramels.  In fact, I've wondered if you dyed a piece, say, brown, and shaped it into a rectangle instead of a cone, would someone on the street recognize it as candy corn?  I don't know.  But I do think they'd find it delicious.