Not every day you get to sit next to a Noble Prize-winning scientist.  But there I was, chair back to chair back with Dr. John Mather, 2006 Nobel Prize winner, sitting at the 2010 World Science Festival NASA tweetup.  The guy is a rock star in the scientific world, a Nobel Prize winner, the guy who gave us early versions of this picture (a map of cosmic background radiation in our universe), and lead scientist on the James Webb Space Telescope (the so-called successor to Hubble, slated for launch in 2014).

Like a 14-year-old with a crush, I debated:  "Should I say something to him?  Do I dare?"  I didn't.  For one thing, his back was to me and I wasn't 100% sure it was him.  I've had enough bone-headed experiences where I thought someone was someone else and looked like an idiot.  More importantly, the tweetup started before I had a chance.  Saved by the bell.

The World Science Festival is a multi-day event designed to bring together like-minded science enthusiasts and reinvigorate and inspire the public with accessible scientific presentations.  Stephen Hawking was the honored guest at the inaugural event in Lincoln Center, a full-size mockup of the aforementioned James Webb Space Telescope (JWST) was placed in Battery Park in Lower Manhattan, and there were plenty of discussions around New York City on topics ranging from black holes to the human genome to life on other planets.  There was even a panel on the science of Star Trek.  This tweetup, held at NYU's Kimmel Center in Washington Square Park, was yet another of these discussions.

After a brief introduction by NASA spokesperson and tweetup coordinator Stephanie Schierholz, Dr. Brian Greene, theoretical physicist, professor at Columbia University, and founder of the World Science Festival took the stage.  Truthfully, I didn't know who he was before coming to the tweetup.  But when the first question he fielded from the audience covered string theory, I thought to myself, "Oh man, what did I get myself into?"  I first heard of string theory when I was a college freshman, and I distinctly remember telling my professor, armed with my "vast" knowledge and expertise in cosmology, "I don't believe this is possible."  Since then, it's been this intractable, how-do-you-wrap-your-head-around-this sort of idea.  (C'mon!  The world is made up of one-dimensional vibrating strings and we live in an 11-dimensional space?!)  But the answer he gave was refreshingly simple and easy to understand that it made me understand why he created the World Science Festival.  His goal with the World Science Festival was to bring science to the forefront of people's imaginations.  He said he wished we'd all feel a connection to science as much as we do to music and literature.

The next guest speaker at the tweetup further illustrated that point:  Dr. John Mather, the guy sitting next to me, the lead scientist on the James Webb Space Telescope, said that science doesn't always have to be about math.  Pretty interesting thought coming from a guy with his résumé.  He said something that really stuck with me:  'Would you enjoy swimming if you were made to memorize facts about it?'  Probably not.  I asked Dr. Mather a question, and a rather naïve question when I look back on it.  Because the JWST mostly deals in infrared light (if you want to know why, read this Q&A with Dr. Mather on UniverseToday.com), I asked if we could still expect from JWST the same kind of jaw-dropping photographs we'd seen from Hubble.  His answer:  'Oh yeah.  We could see a bumblebee at a distance as far away as the moon.'  (That little factoid got a lot of tweets!)

Concluding a program was a pair of astronauts, Sandy Magnus (@Astro_Sandy on Twitter) of space shuttle mission STS-112 and International Space Station's Expedition 18 (going up on STS-126 and landing on STS-119), and Leland Melvin (@Astro_Flow) of space shuttle missions STS-122 and STS-129.  Both talked about their work and their experiences in space.  Leland Melvin said that it took him hours to adjust to zero-G but days to adjust back to one-G.  Sandy Magnus said the same thing; she said it was amazing how much the planet is pinning you down.  After being in space for just two weeks aboard the space shuttle, she could barely lift her arms upon returning to Earth.  She also said that the body forgot how to do things; for instance, when you jump on Earth, you naturally land on the balls of your feet.  However, when she jumped for the first time back on Earth, she (painfully) landed flat on her feet.  Of course, mundane tasks on Earth can also be problematic in space.  Sandy mentioned toe nail cutting; easy on Earth, but in space, the pieces fly everywhere.  Her solution:  duct tape.  An audience member asked Leland about sleeping in space, which is basically done in a sleeping bag that keeps you from floating around.  Leland seemed to have no problem with it, but I know from previous talks with astronauts that sleeping in zero-G is not as comfortable as it sounds.  Sandy said that up in space, you miss a lot of things.  Family, obviously, but also breezes (she was ecstatic after returning to Earth from 134 days in space when the shuttle hatch opened and a breeze of Florida air came through the cabin), and foods that exhibited the characteristics of "crunchy" or "fresh." 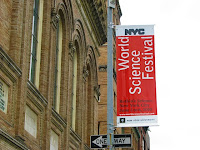 I had a chance to speak with both astronauts after the tweetup concluded.  I told Sandy that I'd been to a number of launches and then seen the shuttle and space station over my head at night.  I explained to her that once the shuttle lifts off the pad, it no longer becomes a tangible thing but rather a concept.  I couldn't convince myself that, once it got into space, the shuttle was real.  I asked her if she felt that way when she's looked up and seen the space station overhead.  Her response:  'If I didn't have the pictures to prove I was up there, I wouldn't be able to believe it was real, either.'  I asked Leland something completely non-space related:  he grew up in Lynchburg, VA, and my brother will be moving there in a few months.  He and I had a great chat for a few minutes, and while I was talking with him, astronaut Clayton Anderson (@Astro_Clay) replied to a tweet I sent him, instructing me to ask Leland about Foley catheters!  (Astronauts love giving each other hard times.)

Hanging out with all of these movers and shakers in the science world helped do something important for me:  it brought them down to Earth.  A Nobel Prize winner said that science doesn't always have to be about memorizing facts.  Astronaut Leland Melvin said that anybody could become an astronaut.  While I don't truly believe that, it was still inspiring to hear.  Most of all, it was an honor to share a room with these guys for a few hours.